Birth of a Metaphor

I was under contract to Wilson Library Bulletin to write a beginner's level article about the Internet, to be submitted to that journal in March of 1992. It was to be printed in the June 1992 issue.

As I wrote the article, I knew it would be one of the first articles of its type. "Zen and the Art of the Internet" had been released on the net by Brendan Kehoe in January 1992, and it had become a net.phenomenon in short order. Heretofore there were only RFCs (Requests for Comments) and other technical writings about the Internet. Kehoe's piece broke new ground for the academic new user and I was determined to do the same thing for librarians.

At that time I was using a mouse pad from the Apple Library in Cupertino, CA, famous for inventing and appropriating pithy sayings and printing them on sportswear and mouse pads (e.g., "A month in the Lab can save you an hour in the Library") The one I had pictured a surfer on a big wave. "Information Surfer" it said. "Eureka," I said, and had my metaphor. 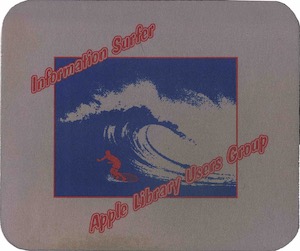 The article was published in the June 1992 Wilson Library Bulletin. You may or may not be able to find an extant copy in your local library. Here's the reason. The WLB columnist, Will Manley, had a column in the same issue called "Sex and the Librarian," or something similar to that. It was a humorous questionnaire about librarians and their experiences and views about sex. Manley was famous for this type of thing, often writing articles on provocative or outrageous topics.

Apparently the publisher thought better of this particular article-- after it had already been shipped to subscribers. The editor, ordered to fire Manley, refused and was fired herself, or resigned in protest, as rumor had it. A new editor was hired. Manley was fired somewhere along the line. (He writes columns for American Libraries magazine now.) Meanwhile, some 12,000 copies were awaiting free distribution at the upcoming American Library Association convention. All were destroyed. (May, 1992 was distributed instead, the WLB trade show booth was picketed, etc.) What issues are left are true collector's items. I do know that WLB has printed reprints of Surfing many times.

In March, 1993, Tom Mandel of SRI, unaware of my piece, wrote an executive overview of the Internet called "Surfing the Wild Internet." It was also distributed widely on the Internet. Tom (now deceased) and I have asked that the words "Polly" or "Mandel" appear in the directory title somewhere.

"Surfing" was updated and corrected in May 1993, and it was one of the first free Internet guides containing any information on Mosaic.

Michael Hart, of the Gutenberg E-Text Project, tells me that "Surfing" is the most frequently downloaded article.

It is fun to hear from readers of "Surfing," as it has made its way around the net over the last few years. The free guides get to the newly-connected areas of the Internet before the commercial trade books do, and since I am committed to extending the reach of the net, I hope to do a new update of "Surfing" in the near future.

Please note that while Surfing may be distributed for free educational use, any commercial use requires permission. Although it may sit on any free server for free educational use, sitting on a commercial for-fee server is not allowed without paying a license fee. Additionally, I charge a fee to press "Surfing" onto a commercial CD-ROM or other commercial collection. Admittedly, these are "nuisance fees" I charge basically to make people think about intellectual property. I'll never get rich from Surfing. :-)